I've been living in Korea for just over three months now, and I think I've finally gotten a handle on the city where I'm living.

Changwon City doesn't even show up on most maps of Korea.    The closest big city is Busan (or Pusan, depending on when your map was made), but Changwon doesn't usually make the cut.    Indeed the Lonely Planet doesn't even mention it at all.    I was pretty pleased with this when I found out where I was going, since I'd wanted to go to a small Korean city or town.    I didn't want to live in or near Seoul, like most foreigners and Koreans seem to want to. (everything is better in Seoul, according to Koreans)    I wanted a slice of small town Korea though, and figured that off-the-map Changwon was going to give me just that.    Afterall, I'd explained my desire to the agency that sent me over, and they wouldn't screw me over, right?

Yes, I was that optimistic once.    I'm a great believer in the theory that most people are basically out for themselves - there's no such thing as an elbow that bends outwards - but for some bizarre reason I overlooked this and placed my faith in the helpful and smiling people who sent me out here.    Changwon turns out not to be that much of a small town at all.    It's what I'd refer to as a decent-sized city.    In fairness though, I'm not sure that my concept of "small town" exists in Korea.    Certainly, the people from the likes of Seoul and Busan refer to Changwon as "the countryside", if they even know where it is!    Judging my home standards though, it is a city .    I guess there's a lesson there about applying any of my home standards to Korea.    Lesson learned.

My first sight of Changwon City wasn't a pleasant one.    Some people here live in houses, but it's far more common to have an apartment.    Inevitably this means living in an apartment block.    The first-time visitor to this country could easily be forgiven for thinking that they've arrived in Communist North Korea if they were to judge by the apartment blocks.    I'd say "functional" is the best adjective I could apply to them.    They're towering, 20 or 30 storey buildings, uniform, grey, rectangular, bland, and well, just plain ugly.    It's like they've taken the concept of architecture and made it a pure science, not at art.    Yes, people can live in there, and the thing won't fall down - great, job done.    The result is something that I imagine you see in the more run-down areas of Moscow, or now demolished buildings anywhere behind the Iron Curtain.    If these are the buildings in democratic, flourishing, free-thinking South Korea, just how bad are things in the Peoples' Democracy (i,e. Communist Dictatorship), up north?

Still, not to be put off by the towering ugliness that was to be my home, I headed downtown to see what it had to offer.    In the three months I've been in this city, the pretty building count rests firmly at zero.    In the downtown area, all the highrise buildings are covered from head to toe with guady neon signs, proclaiming this or that.    I can't blame them for the brightly lit signs though.    Indeed if my buildings were that ugly, I'm sure I'd hide them under neon too.    Sticking with the utilitarian purpose evident in the apartment complexes though, the neon isn't just for show, it's a necessary fixture. 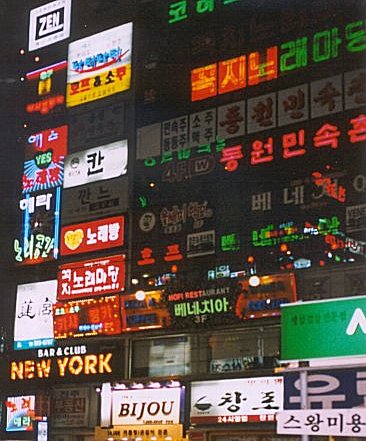 Pretty much they don't have shopping malls here.    There's not really any concept of wandering in on the first floor, consulting a sign to find the store or type of stores you're looking for and then gently making your way to the appropriate level using internal escalators.    No here, you have what could have been malls or shopping centres, but instead they've rented out each shop as a totally independent unit.    None of which seem to bother with inconvenient necessities, like storefronts, or window displays, for example.    There's no way to just stroll around and see what's inside.    You go to the elevator, already knowing what floor you need to get to.    But how do you know which businesses are on which floor???    That's what the wall-to-wall Neon outside was for. :-)

Great system, with only one minor drawback - besides inherent ugliness... namely, it's hell if you're a newly-arrived foreigner.    You're struggling to read the alphabet, let alone know all the words for "bank", "florist", "pharmacy" etc.    Plus the signs might well be the owner's name, or the name of the restaurant.    Pretty much the only way to find out what's in a building is to go in to each seemingly identical floor and wander around until you find a shop you want.    One silver lining in all this is that the locals tend to use English letters on the signs which advertise goods or services they didn't traditionally have in Korea.    Sorta handy if you're a person who likes PCs or Bread.    Or indeed, any English-alphabet signage is fantastic.    If you've never lived in a country using a different writing system to your own, I can only assume you've underestimated the value of our alphabet as an advertising tool .    I see an english sign, and go straight there, pretty much regardless or what's being advertised.    It's not for us foreigners of course, but rather designed as an advertising lure for the locals.    They may well hate american soldiers and not be all that fond of the US being in their country in the first place, but that doesn't stop them wanting to imitate western culture - everything from learning to speak English (Hi, How are you?!?!?!?), to soaking up western culture through the medium of Britney Spears videos.    I guess they've learned the lesson: Blond girls sell stuff.    Still, I can't complain about them using english signage to make their shops appear more prestigious.    At least you know what you're getting yourself into, and not wandering into a brothel thinking it was a DVD room. (Not that that's happened, of course)

Another little niggle that made me dislike the place at first is that I thought it was a huge city, but it didn't seem to have any of the services that you'd expect in such a big town.    Then I realised my mistake.    It's not a big town by Korean standards, but it seems like that to me, because all of the streets here seem to be big 4 or 8 lane motorways.    Huge roads plowing through the downtown.    Surely if the people are all living in high-rise apartments and the roads are huge, then there must be an equally swollen population to account for these things?    Right?    No, of course not.    It turns out that the reason everyone lives in apartment complexes is because the town is ringed by mountains.    Korea is 70% mountainous, and a small country to start with.    Yet in the remaining 30% they have to support some 47 million people - that makes for a dense population.    The apartment blocks are necessary so that they can squeeze a relatively small number of people into an even smaller amount of land here in Changwon.    So OK, the mountains account for the apartment blocks, but surely not for the roads?    If the town isn't that big, then why have these huge motorways, when a simple road would do?    I asked a Korean local - the answer is obvious.    The roads are wide and straight and long, because..... because they are intended to be used as aircraft runways.    Everyone knows that.

Say what?    During the Korean War the communists managed to overrun the entire country apart from a little pocket of resistance around the southernmost city of Busan - that pocket would now include the area where my city, Changwon, has now been built.    Yes, of all the towns in Korea, Changwon is the only planned city.    It's surrounded by mountains and the only really accessible way to attack the place is through a 2km tunnel under one of the mountains.    This is currently the Changwon-Busan motorway - but in the event of a future war, if Seoul were to fall into enemy hands again then my little city would be the emergency capital of the Republic of South Korea.    You can defend the only tunnel into the city pretty easily, station troops and artillery on the surrounding mountains, and then use the super-wide extra-straight roads as runways to fly fighter aircraft and food supplies into the town.    This isn't a military secret or anything though, so I've got to wonder what would really happen in the event of another North Korean invasion.    Surely those nice communists know about Changwon too.    So instead of this being the last bastion, the Alamo of Korea, surely instead it's going to be one of the first places the North Koreans would try to attack?    I feel safer already.    Thanks guys.