To Teach and to Learn

I've never really been a teacher before.  I've done a little tutoring and some teaching in a university during the summers, but I've never written down "teacher" as my profession.  I've taught on the side, while my main profession seems to be better described as "bum".

I came to Korea with many preconceptions, almost none of which are accurate.    The first bias to be blasted out of the water was the idea of "Asian" kids (whatever that means), as hard-working, dedicated learning machines.  Possibly because they have to pay the big bucks to come to private English lessons, and partly because of a well-ordered society based around Confucian ideals of respect for learning, and seniority based on age.
Strike one!  I'm laughing at myself for ever thinking that now!

Another idea I had was that I could do clever little things with the kids to make the lessons more interesting.  Maybe something like translating the lyrics of current pop songs, or giving them chat up lines to try on western tourists... Some little bit of individual flair to make things fun.  Well, good idea or not, I soon found out that I was to be the junior member of staff, hence a bad teacher, hence my ideas weren't asked for.  Working here is not a democracy.   The guy I work for isn't the manager, nope, he's the boss, and what he says is law.  A Korean boss says to do something, and the Korean workers just seem to do it, no questions asked.  One urban legend is of a teacher asking why his pay was short two months in a row, and the boss responding; "Why are you trying to hurt our friendship?"   I can't vouch for every horror story, but from what I've seen here this month - the boss is to be obeyed, and junior employees are exactly that.  Junior; to be seen but not heard.
Strike two!

The final misconception, and one I've only had corrected fully these last few days, is that I thought I was coming over here to be a teacher.  Well, that's what it says in my contract, right?  Well, yes, but teaching kids is just the nominal objective, it's not the real objective.  No, the real objective is to make a profit.
Strike three!  My eyes are open!

Once you realise that though, everything begins to make a certain amount of sense: 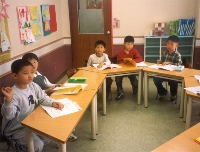 Lots of little things like that.  For the first time in my life, I've experienced education as a direct free-market business.  At first I really hated this and felt very bothered by what we were doing to the kids. (not teaching them English), and also betrayed by the agency who sent me here on a 'Teaching' job.  There's a moral there about agencies, and placing your trust in people, who at the end of the day are also out to make a one-time profit...
I guess though, now I've just accepted the entertainment and money-grabbing motive for what they really are, and once you accept that point of view, everything is a lot easier. (if slightly less moral).

Maybe I'm totally incorrect in my initial assessment.  Maybe I'm totally off-track here and I just have to get used to the differences in their system, but I don't think so.  I think my preconceived notions are gone for good.

At least that's my experience of 'Teaching' this month's classes.   I've learned a lot.