Hit Me Baby One More Time...

The first week I came to Korea I went out for dinner and a few social drinks with the co-workers here.    However, our boss came along, and the whole thing turned into a massive drinking session.    This tends to happen a little bit in Korea, because of a game called "One Shot".    Basically you pour a glass of Soju (a local fire water) for someone else, and they have to drink it in 'one shot', then, they get to pour for someone else.    For some strange reason my boss and the other Koreans seemed to "favour" yours truly, the new teacher, with the honour of being picked for the 'one shot' more often than not.    Oh dear.

I think that might be why some time later, when someone suggested that we go to a 'noribang' I wasn't all that worried.    Noribang translates directly as 'Song Room', but is more commonly known by the Japanese term, Karaoke.    I don't think I would ever ever ever do a karaoke back home - .. actually, I remember doing one just once, but there was a girl involved... so I plead innocence.    Suffice it to say that normally, I'm not really all that enthusiastic about the idea of making a fool of myself in front of people I generally want to like me.    Also, the thing I dislike about the image of Karaoke back home is that you're going to be singing in a bar full of strangers, you're not going to be singing especially well, and why put people you don't know through that torture?

In Korea, it's a little different.    A Noribang is a smallish room, not a whole bar.    At the front there's a large video screen, with a laser disc player attached and a couple of microphones.    Then around the sides there's comfy seating for about twenty people - so you're singing just in front of the people with whom you go in there in the first place.    Also, I'd say Korea must be alone in the whole world in having their noribang organised on a national basis.    Every other building downtown seems to have a noribang hidden on some floor, and each and every song room has the exact same song list, in the exact same order.    If you input song 344 in Busan or in Seoul, it's the same song!    Pretty handy if you're the type who can probably carry one or two easy songs OK.    Just learn the numbers and then you'll always know where to find those songs.

What really makes a difference though is the attitude of the Koreans.    Maybe back home the people have a somewhat justified reputation for begrudgery.    I can just imagine if you were having a good time in such a place, there'd always be someone down in the shadows muttering about the prat up on the stage:
Look at him?    Who does he think he is?

In Korea, it's not like that at all.    Everyone gets up and sings their song or two.    Everyone has a go, and no one is laughed at.    The Koreans are super-enthusiastic about such places.    You sing a little and soon enough everyone is joining in, shouting back the lyrics if they know them, or making up for any shortage of musical talent with an overflowing enthusiasm to clap, stamp feet or just wave the arms and join in a little dancing.    Maybe because I had a little alcohol to lubricate the process, or maybe it was just the effervescent attitude of my hosts, but before long, I was up on the stage air-guitaring to Bohemian Raphsody.    Much to my surprise I really loved it!

If you're still worried by the whole thing though, don't fret:     Just book a couple of hours in a minature song room.     Close-quarter versions of Noribang - you go in and it's just yourself and maybe one friend and you can practice a song in privacy to your heart's content - all ready for the big night out with the gang at the Noribang! :-)     If they still don't know the lyrics though, no worries.     Just enough "joining in" seems to be appreciated, knowing the words, or not.

Of course, it's quid pro quo - it's your turn to stamp and shout when a local puts on a Korean pop song.    Sadly though the local modern music isn't really up to much I'm afraid.    OK, I don't understand all the words by any means, but the tunes are standard packaged-pop.    They have a fast beat and and nicely bouncy and happy and get you into the groove - whilst rotting your brain to bits.    Everytime I hear one I swear I've heard it before.

The best place to hear the worst of Korean music is not the Noribang though - for the real cream of the crop you've gotta head to a DDR.    Dance Dance Revolution.    Thsi started in Japan, as far as I know, but it's really taken off in Korea - big time.    Little kids, teenagers and adults you'd think far too old for it - they're all heading to the DDR.    So what is it?    I don't know if it's caught on at home at all, or even been tried, but I highly recommend it if you get the chance.    There's a video screen, and something resembling the old game of "Twister" on the floor.    As the video plays on the screen, the floor lights up in certain places, and you have to get your feet on the lights as quickly as possible.    It takes a lot of energy, and a lot of flexibility, and probably just a little rhythm - none of those are qualities I abound in, but I gave the DDR a chance nevertheless.    Once more you see how true it is that the locals believe that sweating is good for you.    I could have continued, and maybe gotten a little better at it before my heart gave out, but using the excuse that I didn't want to listen to the dire Korean pop and techno pumping out of the speakers, I said my goodbyes and got right out of there.

The taste in local music is reflected in the taste for foreign music.    I was walking around the music section in the Lotte Department Store the other day and came across sheet music for:

Western music is really in your face here.    Mustly I try to ignore it, but sometimes you'd just love to hear something truly Korean, rather than bland pop or Korean imitations of it.    Then again, sometimes hearing a little snippet of western music can be so good.    Sitting outside the aforementioned department store (Mall culture has caught on in Korea a little), and eating ice-cream with a friend, when I notice that the music that's playing in the background is "The Corrs".    Or walking through a supermarket tapping your hand on the trolley to the background beat of Enya's Caribbean Blue - little touches of home - perfect because they're unexpected.    It's strange to see what Irish music has made it out here and what hasn't.    The Corrs are definately big - maybe because they are pretty girls by Korean reckoning, or who knows, but anyway, most people would seem to know of them, even if they don't know that they're Irish.    On my first night in the Noribang I tried my hand at Van Morrison's Brown Eyed Girl - shocked that the Koreans would even know about him, and then doubly shocked when they told me they'd never heard of U2!    Judging solely by noribang standards I'd say Western, or Western-style pop music is the order of the day here in Korea.

On the other hand, there's some real "Eastern" music to be found here if you go and look for it.    Sometimes there are revivalist performances on the street or in a theatre.    Also at the temples up in the mountains you come across the Buddhists with their bells.    Atonal music, the banging of a gong, the voices lifted in song, and the long low slow sound of meditation music.... it really is captivating.    Especially when the contrast is with the "Bye Bye Baby Love" lyrics of the current crop of Korean crap. :-)    One of my regrets from earlier travel is that I didn't pick up any mementos of the local music.    Looking back it seems almost a crime to have gone to the home of Tango or Samba and not brought back some musical memories with me.    I'm not making that mistake this time.    I've already got a set of Korean Meditation Music tapes - makes great background noise for those times when you're just bumming about at home reading a book or whatever.    Unfortunately my flatmate isn't exactly the greatest lover of Korean music, so I have to choose my moments pretty carefully. 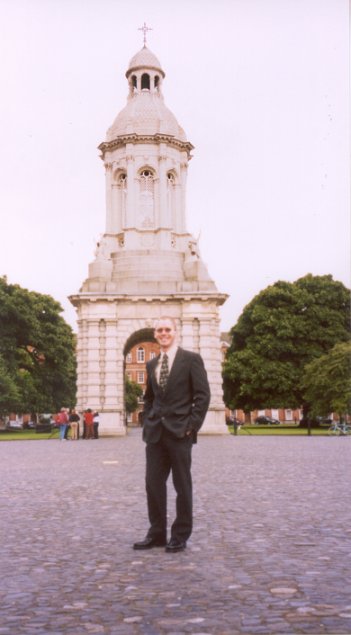 Especially since I'm also trying the audio assault with my attempt to learn some Irish Music.    I bought a tin whistle shortly before coming here.    Being out of the country makes me far more nationalistic than I'd normally be back home, and I guess this was just a cheap and lightweight way to try to cling to something Irish.    Unlike a guitar or a piano though, the "music" from a tin whistle can be pretty disasterous when you're a beginner.    The first few days I was sure I'd come home only to have my flatmate tell me that he was ever so sorry but he'd accidently hammered my whistle a hundred times and then accidently thrown it out the window.    I wouldn't really have blamed him.    Basically a tone-deaf toad being slowly strangled to death would have more musical ability than I do.     I guess I have to confine my learning to the times that I'm alone in my apartment now.    At least until my music stops driving the dogs crazy. ;-)