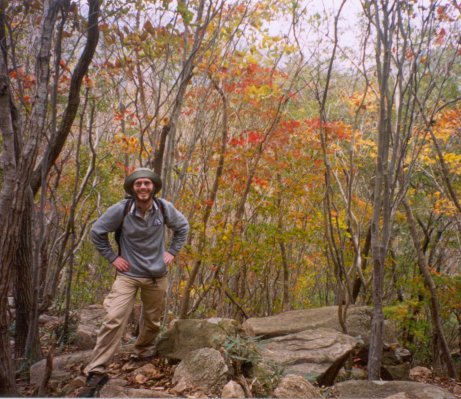 One of my lasting memories of Korea, and the Korean people comes from an encounter with a woman I met on the mountain ridge when I went hiking in Jirisan .    I was ambling along, admiring the freshness and wonder of the place, when a middle-aged woman came down the trail towards me.    Eager to try my newfound Korean phrases I tried to say "Hello", "How are you?" etc.    Eventually I ended up telling her where I was from, how old I was, where I was in Korea, how long I'd been here and so forth.    Or at least I think that's what I was saying.    It was as much body language and guesswork as actual Korean.    Still, I had an ulterior motive besides wanting to be friendly to strangers or to improve my Korean.    I had just passed a brook, about half an hour back the trail, and so had plenty of water.    However, I didn't have much food at that stage and I was hungry.    So I engaged her in conversation, gave her the friendly foreigner act, and then offered her some of my precious water.    I knew there hadn't been a stream in her direction for some distance and so I was not surprised when she took my offering of water and gulped it down.    But wait.... shouldn't she be offering me food at this point?    Hmm... there's nothing forthcoming.    She's not reaching into her pack?    I've just wasted by delicious water on this ungrateful wretch?    What?    It turns out that she had no food, and was just as laughingly unprepared for the mountain as I.    On the other hand, by way of expressing her thanks, she removed her gloves, took my right hand in both of hers, raised it to her lips, and kissed my fingers!    Then she backed away, bowed three times, and walked off down the way I'd just come.

Bizzare?    Certainly.    I was more than a little shocked.    Is this normal in Korea?    In Asia?    Anywhere?    Maybe she was parched and just gasping for water, but still...    I later slid this incident into my " Koreans want foreigners to love Korea " mindset, but at the time it amazed me.    It still does in a way, but I guess now I see it in its cultural context.

This was one of the first strong impressions that Korea left on me, and I'm glad it was something so positive.    I wonder how different my outlook would be now if I'd run into some idiots or assholes on the mountain?    I often read the Lonely Planet discussion groups, and a message on their North East Asia forum recently caught my eye:

I'm a Canadian thinking of going to Korea for a year to teach English.
But I've seen a lot of reports about strong anti-American feelings in Seoul.
What do you think?

I was going to reply at the time, saying that to my knowledge Korea is one of the best countries in the world for westerners to visit, and maybe giving an anecdote like the one above to show just how well I'm been treated by the kind, warm and welcoming poeple here.    I didn't get the chance however, and now, a few days later, I'm not sure my answer would be the same anyway.

There's a tradition in Korea known as servicee .    Somewhat cynically, I usually explain it by comparing servicee to shoplifting.    With shoplifiting, someone gets "free" stuff, but everyone else pays for it, because shop prices will just be that tiny fraction higher to compensate, right?    Servicee is like that, except that the shopkeeper gives you extra free stuff when you make a purchasse.    It doesn't always happen, but when it does it can be magic.    My first experience of this was buying some fruit in the supermarket.    I went up to have my bag weighed, which the assistant promptly did, but then, just before tying the bag, she heaps another two handfuls in there, and seals it up - all at the original weight and price.    Obviously I looked a little confused / foreign, because she just smiled, said "Servicee" and I walked away, pleased, but confused.    Servicee is fantastic - it makes you feel like the shopkeeper is giving you a little treat, and whereever I'm a regular, I very frequently get servicee.    On the other hand, some small part of my brain knows that there's no such thing as a free lunch, and the "free" goods have to be paid for somewhere.    Obviously the vendors just raise prices generally to compensate.

A discussion amongst some foreigners in the staffroom set me thinking though.    It turns out that none of us have gotten servicee in the last week or so.    Odd, very odd, but not enough to cause outright suspicion just by itself.    It's not just by itself though.    Taxi drivers have been giving us the scenic route to standard destinations more often lately.    Or hammering the accelerator to increase the fare.    I don't especially trust taxi drivers of any nationality, but in Korea, in the beginning, I don't remember this sort of thing happening.    The real crunch though was a nugget from a couple or South Africans here.    They got into a taxi, were asked their nationality, and when they said they were African, or in other words not American the driver was super nice to them, brought them directly to their destination, and left them with the parting comment:
Osama bin Laden.    Terror.    Hahaha.
Funny guy that taxi driver.

That was bad enough - but then two real Americans at my school told me about their recent trip to Busan. (Korea's second city, about 20 minutes down the road from here).    The subway lines there meet at a cavernous central station, designed as one huge hall with many stairs and tunnels in and out.    They entered this space to see it full for the first time.    Full with a crowd, a stage, and a big display of a US flag, with a Skull and Crossbones where the Stars should be.    Not good.    But it was either leave the subway, or face the crowd, and they decided getting to their destinatlon was better than running from some silly cranks at a protest.    Half way around the edge of the crowd / mob, they were spotted.    White people have a tendency to stand out here. :-)    The people immediately near them turned from the stage and made a little circle around my American friends, shouting something at them in Korean.    You don't need to be a linguist to guess the gist of the message.    Emergency Exit.

On the other hand, they are Americans, and people tend to exaggerate, and anyway, how bad could it have been?    It's not as if the USA doesn't have the occassional demonstration / protest / loony leftist / radical right / race riot etc.    Then it happened to me.    On the way to school, I wasn't in a particularly good mood anyway, and ran into another group of kids armed to the teeth with English phrases, and lying in ambush for the verbal assult. "Hello!    How! Are! You?!"    Normally I try a bit of Korean banter with them, but this time I just wasn't in the mood for kids before work, and so just walked on.    They purused me down the street, but this time their message was a little different.

We hate you.
We hate America.
Fuck you USA.
Go home USA.

I know a couple of choice Korean phrases I could have replied with, but I didn't think I wanted to respond at all, and so just walked on.    They followed, and it turned into a chant.    Eventually I got to the "saftey" of school.

It doesn't sound like much.    Afterall, I was in my own neighbourhood, in an area I know very well.    It was daylight.    They were only kids.    For some reason though, it almost had me in tears.    I went to my classroom, made some ginseng tea and just sat there looking at it sloshing around the rim of the cup as my hand shook - with fear or anger or embarrasment, I don't know.    I just know I didn't like it.    Yes, they are only kids, or it's only some fools led astray in a subway mob, or it's only a taxi driver, and what do taxi drivers know anyway?    But there have been enough little things like that - not getting Servicee when I should or being screamed at by kids - there's definately a change in the air in Korea.    Season of goodwill to all?    Yeah, maybe, if they're not American.    I've never felt like I was in a country where I was hated just because of where I'm from, but as much as I hate to admit it, that's exactly how I've felt in this beautiful country sometimes lately.

On the night of January first, I was stuck in a transit town, heading back home after being away for New Year's Eve.    Unfortunately I'd missed my bus, and was forced to find accommodation late at night.    The bus terminal was way out of town, so I asked a taxi to drop me somewhere reasonably central.    He eventually led me to what seemed to be a seedy part of town, and told me I could find hotels in this neighbourhood.    A "yeoinsuk" is a traditional Korean inn, and it's usually a pretty low-class place.    Perfectly adequate if you just want a place to sleep before getting a bus out the following morning though.    So I asked the first guy I met on the street if he knew of a Yeoinsuk in the neighbourhood.    He seemed a little shifty / sketchy / shady, or generally unwholesome, but beggers can't be choosers, so off I set.    Then he led me down a side-street, then into a badly lit alley, then down a rut with no lights at all.    I've never, never, never, never distrusted Koreans.    They are wonderful people, and wouldn't dream of hurting a Foreigner.    But..., but... it was dark, I was a stranger, and no one knew I was there.    Hmmmm.... It may have only been a rut, a tiny gap between rows of houses, but you can bet your life I was walking straight down the dead-centre of it, and keeping my helpful guide a good pace and a half ahead of me, and to the right.    We come to a dead end, he turns around, reaches out towards me - and points to the Yeoinsuk on my left.    I'd been so intent on keeping my distance and planning exit strategy that I hadn't even noticed the inn.

The Yeoinsuk was a comfy little place.    As is traditional, my room was no bigger than a (small) double bed, but that didn't matter, since there was no bed in there.    Koreans have a groovy little habbit of sleeping on the floor, and as I lay down in my blankets, I couldn't help but wonder why I'd distrusted the helfpul stranger who not only gave me directions, but actually took me directly to the place I needed to go even though it was out of his way.    Typical Korean hospitality and yet I'd been suspicious.

I fell to sleep on January first thinking that Korea had been ruined for me, just because of a lot of anti-Americanism, and a few harmless little incidents.    I'm prone to overreaction though, and there's nothing I do so well as second-guessing myself, so now I'm wondering if it was just a once-off incident.    Will I always have a suspicious mind when it comes to Korea now?    Who will I remember more?    Those wonderfully charming "Fuck You USA" kids, or the woman who took my hand on the mountain?