The Rise and Fall of the Ten Nations

After the Breaking it took almost two hundred years but eventually nations did emerge. 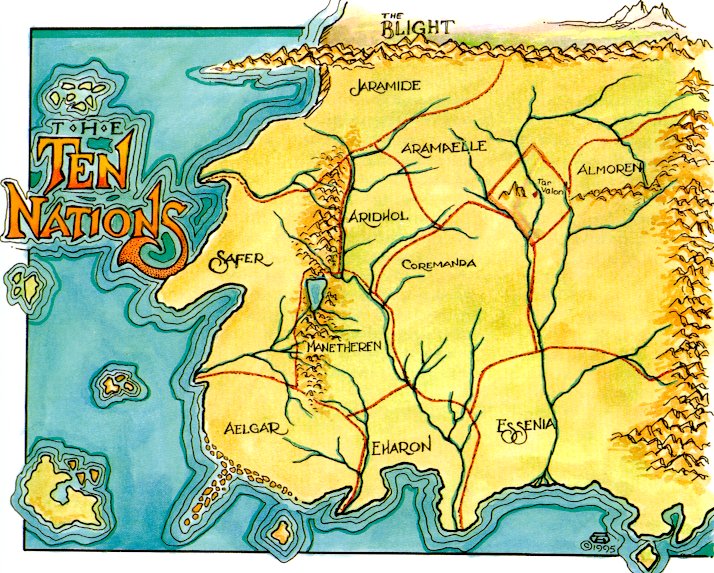 In 209AB ( Toman Calendar adopted approx. 10 years earlier ) the Compact of the Ten Nations was formed.
Known as the Second Compact it was largely the work of Queen Mabriam of Aramaelle, reported to be Aes Sedai.


The Compact lasted for roughly eight hundred years, and the people lived in relative peace and prosperity until 1000AB when the Trollocs came south.

The lack of Trolloc archers bothers me. It could be argued on the one hand that they don't have the discipline for co-ordinated archery in combat, but OTOH archery seems perfect for a Fade-linked Fist - especially when you consider that there would be almost no danger to the Fade in this instance.

The Compact was successful in that each nation rallied to support the war effort and the other nations but it was weakened by each nation's insistence on maintaining its own separate armed forces. The White Tower supplied Aes Sedai to assist the armies of the Compact against the Dreadlords, but even those Aes Sedai were under command of the Tower alone.

The Banner and Legion structure disappeared during the latter part of the War of the Hundred Years.

Anti-Trolloc Tactics : After long harassing actions by cavalry, human infantry took up a defensive position in front of the wave, holding it long enough for mounted archers to move in from the sides and whittle the enemy down safely from a distance. Those Trollocs not destroyed in the pincer broke and ran. Both cavalry and infantry had to be fast, and the infantry had to have the courage to stand against an onslaught by monsters. If the force was too large for the infantry to hold, the human army would pull back to let it pass then hit it from the sides and rear.

Conclusion : Trolloc incursions managed to reach as far south as Tear and Illian.
In Manetheren, Elderne used the One Power to hunt down the victors, and supposedly sent balefire to consume the Dreadlords, Myrddraal, and Darkfriends where they stood.


In direct contravention of the well-established 'must be able to see exactly what you're doing' rule that normally applies to channeling.

After almost three hundred years of fighting the Trollocs were soundly defeated at the battle of Maighande.

Aftermath : Aelgar, Eharon, Essenia, Jaramide and Safer survived after a fashion, but within fifty years new nations were assembled.
However the White Tower survived, and even gained lands and influence.


Given that nations survived, and that the White Tower was fully intact, I can't see how it's possible for the dates to get mixed up to the extent that they require a new calendar, especially when you consider that three hundred years isn't that long for an AS, or indeed for an Ogier - and don't forget that the Ogier were out and about during the Trolloc Wars, not confined to the stedding as is the norm now.