The Second Dragon and the Rise of Arthur Hawkwing 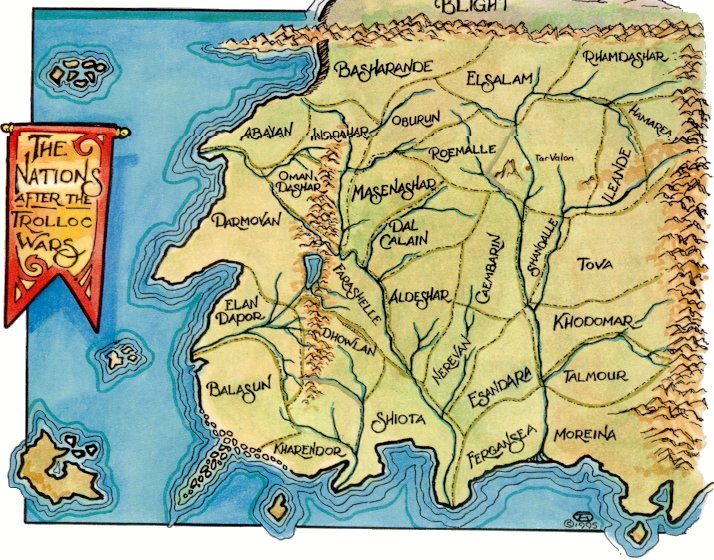 For almost eight hundred years there were no major upsets, that is until Arthur and Guaire both born in early 900's.


That's nowhere near Tear I'm afraid, so another theory is squashed.

In FY 937 he married his first wife the Lady Amaline Tagora.
At the age of twenty seven he ascended the throne.


Amalasan's Background
Early in FY939 Guaire Amalasan named himself the Dragon Reborn in Darmovan - an educated man - had the 'ancient symbol' on his banner in a field of blue, and named his followers 'The Children of the Dragon'.
In FY 939 he was in his twenties with dark deep-set eyes and a mesmerising gaze.

The Rise of the Second Dragon
Within half a year Darmovan was his.
One of the Great Captains of the time. Took both Balasun and Elan Dapor in less than a year after proclamation.
By FY943 he had added Kharendor, Dhowlan, Farashelle, Shiota, Nerevan Esandara, Fergansea and Moreina to his holdings.
There were approx. 30 AS in the Stone of Tear, which was under siege, but with the AS assistance it held out. Talmour and Khodomar were in danger of falling into Amalasan's hands, and fierce fighting had begun in Masenashar, Dal Calain, and Aldeshar itself.

The Resistance
By the summer of FY941 every nation had sent armies against him.
Shandalle was not in the same rank as Basharande, Elsalam, Rhamdashar, Hamarea, Caembarin, and Aldeshar, yet it was one of the first to send an army in the spring of FY940.
Paendrag never lost a single battle against Amalasan.
By FY942 he was called Hawkwing.- chosen for the speed with which he moved his troops.

The Battle of Jolvaine Pass.
The decisive engagement came in the spring of FY943.
Hawkwing moving south out of Tova to join the fighting in Khodomar, with 23k foot and 12k horse, of whom some were probably Tar Valon soldiers, and an indeterminate number of Aes Sedai.
Amalasan with some 41k foot and 26k horse apparently intended to cross the Maraside Mountains and strike into Tova - he was known for leaping past what others considered the obvious battlefield to open battle in his enemy's rear.

Forested region limited the use of cavalry, and Amalasan dismounted a good portion of his.
The day went Amalasan's way, both sides losing men, but Amalasan was better able to afford the losses.
The Aes Sedai, whatever their number, were barely able to match Amalasan's use of the Power in battle.
By nightfall it was a miracle that Hawkwing's army still held together.

Hawkwing began a retreat toward the pass at nightfall, with the rear guard engaged in skirmishing to protect the 'retreating army', but Hawkwing divided his troops ( in contravention of established military procedure ) and sent them east and west.
At dawn Amalasan, having believed the reports of his scouts, was focused North towards the pass, when Hawkwing's infantry struck from the east and west, while his cavalry came from the south.
Guaire Amalasan could have rallied his troops and still turned the battle his way, but Hawkwing's horsemen and the Aes Sedai drove straight for his Banner, and Amalasan was captured. Once news spread the Dragonsworn army collapsed.

As soon as his forces could be brought together Hawkwing drove through the Jolvaine Pass and north to Tar Valon.
Hawkwing took his entire army to within a few miles of Tar Valon, despite tower law which forbade anyone to approach with more than twenty armed retainers.
The AS who accompanied him, received stiff penances which were kept secret for a number of years.

Sawyn Maculhene set out from Khodomar with an army estimated at fifty thousand men, and Elinde Motheneos marched from northern Esandara with a larger force.
Maculhene was a cavalry leader of both daring and skill, while Motheneos, said in some accounts to be a renegade Aes Sedai was an expert in siege warfare.
The attack by Maculhene and Motheneos came as a complete surprise to Tar Valon, capturing at least two of the Alindrelle Erinin bridges and reaching the White Tower itself before being blunted.
Some non-Aes Sedai sources say that Hawkwing was allowed ( or perhaps asked ) to bring his forces in to Tar Valon to help repel the attack.
Both leaders, and at least 40k supporters died.

The Aftermath
In early summer of FY943 Hawkwing was back in Shandalle, but Bonwhin never forgave him for entering Tar Valon with an army. Some say she refused to grant him an audience, others say that he refused to attend.
In the summer of FY943 Queen Nesaline of Caembarin , King Tefan of Khodomar, and First Counsellor Almindhra of Tova simultaneously sent armies into Shandalle.
They were not at all successful, and the battles from FY943 to 963 became known as The Wars of Consolidation - the consolidation of Arthur Hawkwing's Empire.
Before Guaire Amalasan, the idea that people could betray the nations of their birth to follow a single man, had seemed crazy - but that is just what people had done for Guaire Amalasan - and now people did the same to march in support of Arthur Hawkwing.
By the end of FY943 he holds nearly half of Tova and considerable parts of Caembarin and Khodomar. He had not been defeated once.


The Establishment of the Empire
Although wars were usually ended by White Tower intervention, there is no record anywhere of any attempt at negotiation by the Aes Sedai.
Early in FY944 Aldeshar sent men to aid Caembarin, Ileande sent men to Tova, and Talmour to Khodomar.
But by FY 963 Hawkwing was the undisputed ruler of every scrap of land from the Aryth Ocean to the Aiel Waste, with the sole exception of the territory ruled by Tar Valon.
The High Governor of the Stone of Tear declared for Hawkwing, and a rebellion by dissident nobles gave him the rest of the country.


In all the wars he never lost one battle.

This bothers me a little. Sure he was a good general, but even the best of generals lose battles. It happens. Was his ta'veren ability really so strong as to carry every single battle ? For example, would Mat conquer all the land from the Aryth Ocean to the Spine without ever losing a single battle ? It seems unlikely to say the least.