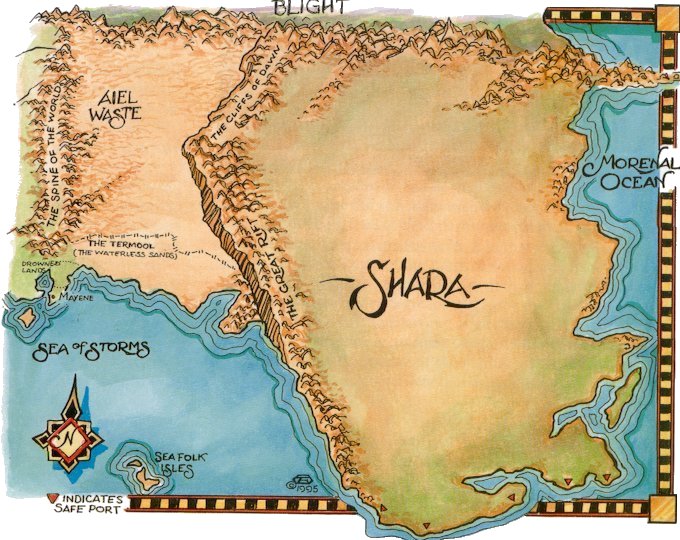 Misdirection :
Farstrider's Travels states flatly that lying to foreigners appears to be endemic to the culture.
Sharan merchants are unwilling even to allow the truth of their appearance to be known, walking among outsiders only when cloaked and veiled.
Claim that the Trolloc Wars did not touch them, despite the Aiel statements that it did, and the fact that the Mountains of Dhoom and the Great Blight cut across the northern part of their land in much the same way as they do our own.
They consistently deny any knowledge of Arthur Hawkwing's invasion fleet, insisting despite the Sea Folk's eyewitness accounts, that it never existed.
They practice Chattel slavery and indeed their culture seems entirely based on misdirection and enslavement of the many by the few.

The Ayyad :
Channelers in Shara, both men and women, called the Ayyad,

It's clear from the following description that although the channelers are called the Ayyad, other people are called that too. That's important to bear in mind when considering any future evaluation of Sharan channeling strength.

live in villages cut off from the outside world surrounded by high walls, they aren't supposed to leave w/o permission, however the source of this permission is somewhat vague.
The Ayyad are tattooed on their faces at birth. Someone who is discovered to be able to channel later in life, presumed to be the result of a union between one of their ancestors and an Ayyad, is seized, tattooed and confined to an Ayyad village for the rest of his or her life.
Sexual congress between Ayyad and non-Ayyad is punishable by death for the non-Ayyad, and for the Ayyad, if it can be proven the Ayyad forced the other.

Eh, their women rape men ? Sure the OP allows you to overpower someone, but forced-OP arousal ? And I don't think that they're referring to lesbian sex.

Any child of such a union is killed by exposure to the elements.


This I just don't understand. Why is the attitude to a half-breed baby different than that towards a non-Ayyad with an Ayyad ancestor somewhere in the past. If they are trying to maintain the purity of their stock, then surely the reverse should be the case, i.e. they will let in half-breeds, but not those who are distant relations.

Male Ayyad are kept completely cloistered, & it is forbidden to teach a male anything beyond feeding and dressing himself.
Male Ayyad are considered breeding stock for female Ayyad.
Daughters are raised by their mothers, but sons are raised communally, though they are never called 'sons' only 'the male'.
Around his twenty-first year he is killed and the body cremated.

Rule :
The land known as Shara is 'ruled' by a Sh'botay or a Sh'boan, who die every seven years.
The people believe that the deaths are simply "The Will of the Pattern".
The ruler is surrounded by Ayyad women as servants. The only way to approach Sh'boan or Sh'botay especially for a favour or ruling, is through these women, and the reply is usually delivered by these same women.
Some rulers have failed to live the full measure of their seven years - a failure taken as a sign of the Creator's displeasure - more likely that these rulers discovered that, despite their great power, the real control was in the hands of the Ayyad.


One thing that I was disappointed by in this chapter is the complete non-appearance of the Ogier. Afterall, I don't really see them fitting into the culture of misdirection, and they're probably not too afraid of the Ayyad.