Cablecar
Not a cablecar.

When the Japanese use the term cablecar, what they actually mean is what we'd call a "funicular railway" - a train that goes on tracks up a steep hill or mountainside.

Calendar
Japan has been using the Gregorian Calendar, just like in the West, since 1873.

All government notices, official documents, public holidays etc., will use only this standard system.    However, traditional events, religious festivals and so on, may still follow the lunar calendar. 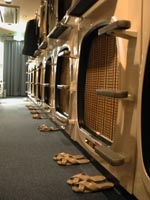 These "hotel"s exist to shelter SalaryMen who have had more alcohol than they can handle, and just can't make their way home.

The tiny "rooms" resemble a cross between a futuristic sci-fi deep-sleep pod, and a coffin.    They are definately not for the claustraphobic, and many don't take women, but if you have a chance, then don't miss the opportunity to stay overnight in one of these places.    More than almost anything else, they typify that through-the-looking-glass "Only in Japan..." feeling. :-)

The Japanese Tea Ceremony is a highly crafted, thoroughly styilised art form, invented by a Samurai, influenced by Wabi and Sabi, and performed by both women and men in modern times.

The rules are horribly complex, and require a massive amount of study to master.    Probalby the most a foreigner will ever have to worry about this is from the participants point of view.    Still it is complicated, but at a minimum, try to rotate your cup three times and lift it a little to admire the pictures.    After that, just try copying whoever else is being served before you. ;-)

This is sometimes known as Sado - the Way of Tea.

In days of yore, this was the Tea Room where wealthy men would come to meet beautiful geisha and be entertained for an hour or two.    These days, these elegant Tea Rooms still offer some light refreshment, but he chances of you entering a Geisha-frequented room are practically nil, at least without an invitation from a pre-existing member.

A Cherry Girl, that is to say, a virgin.

Chishima   ( The Kuril Islands, The Thosand Islands )
Technically speaking, Japan is still fighting WWII.    At the end of the war, Russia controlled these islands, and peace talks between the two sides have stalled on the issue of ownership.    So much so that an armistice has never been signed, and Russia and Japan are still at loggerheads over them.

The islands, lying off the north of Hokkaido, are pretty bleak and dreary, and many are totally uninhabited, but they contain rich mineral resources, carry valuable fishing rights, and importantly for the Russians, they control access to the Sea of Okhotsk.

Unfortunately it's not simply a case of Russia grabbing what it could at the end of the war.    Both the Russians and the Japanese advanced into this area only relatively recently.    The Russians advanced with the laying of the Trans-Siberian Railway, and before that from the port of Vladivostok, and the Japanese gained control of the area after finally pushing out the Ainu, in a pre-emptive move to fend off the Russians entering Hokkaido.

Chopsticks ( hashi )
Chopsticks originated in ancient China, and were imported into Japan along with many other aspects of Chinese thought and culture.    They are usually made from cheap wood or bamboo, coated with lacquer or painted.

European businessmen tried to import knives and forks, but the idea never really took off.    Which is a pity in some ways, since it means there's a whole series of foods missing from Japanese cuisine.    You either have something like miso soup, with the consistency of water, that can be drunk, or you have something solid, which can be grasped - there's nothing in between.    Foods like western soup, desert rice, custard etc. would all be impossible with chopsticks, even for the Japanese. ;-)

One point to watch out for when sharing a meal with others is that when taking food from a communal dish, your chopsticks should be turned upside down to prevent you from contaminating the comunal food.    Although this point need not be followed when eating with family or very close friends.

When eating out, the restaurant or izakaya will always provide the cheap half-split disposable chopsticks for you.    For a country with such a huge garbage problem, no one seems to bother with the reusable metal chopsticks popular in countries like Korea, and instead each time you eat out in a restauant, another little piece of nature dies.    Bon appetite! ;-)

Christmas Cake
In Japan, age counts.    Especially if you are a woman.    The ideal of feminine beauty in Japan is youth and innocence.    Plus, there's a lot of pressure on women to get married.    So, if you're an unmarried woman, and heading towards thirty, we'd say that you're being "left on the shelf" or maybe "past your sell-by date".

In Japan though, they compare such women to a "Christmas Cake".    It may well be sweet and delicious, but no one really wants any after the 25th.    So, if you're an unmarried Japanese woman, after the age of twenty five, you're in extreme danger of becoming a Christmas Cake.

The good time that's been had by all.

Just to be clear, I'd like to officially deny that any subject people ...eh, enthusiastic participants included in the Great Japanese Empire ... eh, the Greater East Asia Co-Prosperity Sphere, .. none of those women were ever rounded up and forced to work as round-the-clock sex-slaves for courageous, loyal and patriotic Imperial Troops, who would be far too honest and kind to even imagine such an activity.

Cosplay
Dressing up in kinky costumes and having sex, possibly for money.

Cosplay originally meant wearing a costume whilst having sex, but of course role-play is the real fun.    Cowgirls and Sexy Secretaries seem to come a distant second to the usual Schoolgirl Costumes, which, if you're interested, can be purchased at a reasonable price in many department stores.