Wide sash-like belt worn to fasten a Kimono.    Kimono don't have pockets, and so small items are either carried up the wide sleeves, or tucked discretely into the Obi.

The obi is fastened at the back with a complicated knot.    Although for practical purposes, a simpler front knot may be tied, and then the obi rotated around placing the know at the back.    But how much would you trust a lady whose obi comes undone too easily? ;-)

Office Lady   OL
The "flowers of the workplace".    Be careful not to store them too close to the very low and not-very-glassy ceiling.

A group of islands stretching south from Kyushu all the way down to within sight of Taiwan.

With their proximity to China, their unique food, music and culture, sub-tropical climate, lush vegetation, white-sand beaches and warm waters, the islands of Okinawa are often portrayed as the Paradise of Japan in the tourist brochures.

However, my picture of paradise doesn't include 27,000 US GIs.    Okinawa accounts for 1% of the land of Japan, but plays unwilling host to 75% of the GIs.    Okinawa was captured from the Japanese at the end of WWII, and subsequently handed back.    However, the US bases are situated on plots of land, the owners of which are forced to lease to the US (through the Japanese government).    It's your land, but you have no choice but to let us use it.

That being said, the GIs bring an interesting mix to the local culture, and whilst this is the poorest region of Japan, the GIs are out there spending lots of money in the local economy.

Literally, it means a "meet-and-look marriage," although traditionally it was very hard for a young Japanese to refuse to accept the potential partner to whom they'd just been introduced by their parents and the nakodo (middleman).

The tradition of arranged marriage is an old one in Japan.    Considered more a merging of households than individuals, they were popular among the samurai class as a way to cement alliances.    This type of marriage then spread to the lower orders from the 17th century, and in prewar Japan, the majority of all marriages were omiai kekkon.

After World War II, the trend was to abandon this restrictive arranged-marriage system, in favour of the Western ideal of a Renai Kekkon (love marriage).    However, this foreign ideal didn't suit everyone either.

It didn't necessarily produce a partner of the right economic, social, and educational qualifications.    "Today's young people are quite calculating," says Chieko Akiyama, a social commentator.    Omiai Kekkon are still seen today as a way to ensure a good match, and modern arranged marriages are not as restrictive as their samurai-era predecessors.    Nowadays, after the initial meetings, it is perfectly acceptable for one side to turn the other down.    Polite refusals are made through the nakodo, who tactfully expresses regret to avoid loss of face to either party.

No one really knows for sure how many people choose an omiai kekkon, but estimates put the number somewhere between 10 and 30 percent of all marriages.

Omiyage
Souvenier gifts given to family, friends and especially co-workers when returning from travel.

In Japan, leaving work for a holiday is a Big Thing (tm).    You're swanning-off, enjoying yourself, and letting down the group - your beleagured workmates have to pull your weight whilst you're lying in the Onsen sipping sake.    In order to avoid shame and preserve harmony, you bring back some gifts for those you let down.

Shopping for Omiyage is therefore a serious business, and can take up a substantial proportion of your vacation time.    It's much better then to simply buy the omiyage from your local regional speciality store after your return!    These stores also act as Aribi-ya for wayward husbands seeking to fake a trip away.    Honey!    I'm home!    And I brought you some lovely rice sweets from Kyoto!    ( ... which, I picked up in the local-fake Omiyage store after coming out of the Love Hotel with my mistress... )

Of course as far as Omiyage goes, everyone knows about these stores, but even so, it's the thought that counts! ;-)

If you do need to give real omiyage to someone, there a a few set phrases to use when handing the gifts over.    You could try:

Which more or less means, "This is a boring thing". :)

Onigiri
The Snackfood of Japan.

Bread isn't a traditional Eastern food, and in Japan, the role of the sandwich has instead been filled by the delicious Onigiri.    An onigiri is a lump of rice, in a triangular shape, stuffed with pickled plum or fish, and wrapped in a layer of seaweed.

These onigiri are avaiable in a variety of flavours from every convenience store in Japan.    Thesedays they even come with a cleverly-designed removeable packaging, so the Onigiri doesn't come apart in your hands. :-)

They are a great snackfood - quick, cheap, delicious and healthy.    What are you waiting for?

Onnagata
In Kabuki, this refers to actors who specialise in female roles.
Onsen

After my experience in Korean public baths I thought I'd be a natural at the Japanese version.    Sadly, there is one important difference.    Although, as in Korea, the baths are segregated by gender, unlike in Korea, you still carry a little towel to cover your genitals.    Not knwing this, I walked in confidently, totally in the nip (pardon the pun), and only gradually noticed that everyone seemed to have a little towel, and everyone just seemed to be holding them casually in exactly the right way to cover their 'private' areas.    Oh dear.

An interesting thing about the gender segregation in Onsen is that, apparently, and I haven't been able to confirm this, but apparently... they have only been segregated since the Americans arrived in Japan and told the locals that bathing naked together wasn't civilised.    Also, apparently, some Onsen have "private booths", but what goes on in them, I hesitate to guess.    Given some of the other depraved things which go on in Japan, I shudder to think.

On-time, Being
In the West, being on time means showing up at the requested or specified time.    If there's an appointment at 3pm, please be there at 3pm.    However in Japan, showing up exactly on time is considered a little rude.    If you would like to be polite and show some respect, it's expected that you should show up before the time you've agreed to be there.
Ore Ore Sagi ( It's me! It's me! )
Crank-calls by conmen.

And amazingly enough, it works.    Open the newspaper on any given day, and the chances are you'll see a small report of another ore ore sagi.

But, ah, where do the callers get the names and the numbers?    It's a lot easier than you'd think, once you're aware of it.    For example, every time you go to a busy restaurant you're asked to leave your name, address and phone number.    I'm not saying that the restaurant staff are unscruplous, but it's always better to give a fake name and address anyway, unless you want to be bombarded with direct mails, or worse, Ore Ore Sagi! 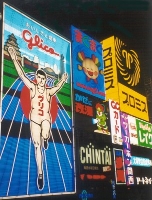 It may only be the third-largest city, but the residents claim it's the real eating, driniking and entertainment capital of Japan.    More than anything though, it's a business city - in the local Dialect the standard greeting is not "hello", but "Are you making any money?"

Tokyo and Yokohama are bigger, Tokyo has a better mix of classical sights and pop-culture, and nearby Kyoto is far more elegant and prestigous, but the people of Osaka know which city is best.

During the wars of the Kamakura Period, Osaka rose to preeminence by selling military supplies and it also became a port for the trade with China.    The trade guilds in Osaka became so powerful that they turned it into Japan's only "free city", able to bargain as a corporate body with the Shogun.    This proved to be something of a golden circle - the freedoms it had gained, drew yet more merchants and trade to this business city, and plenty of Ronin flocked there and were hired to defend the city.    Osaka grew to be the richest city in Japan, long before Tokyo was even incorporated.    Today it enjoys a GNP higher than all but 8 of the richest countries in the world.

The peope of Osaka have a reputation for being earthy and frinedly, open and warm.    All the good things in life can be found in Osaka, at night, and for the right price. :-)