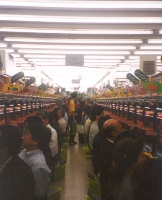 Vertical pinball machines.    A form of seppuku for the brain.

Devices for those who believe that money doesn't already disappear fast enough in Japan.    A 10,000 yen note would probably last longer if you put a match to it.

Pachinko parlours work on the principle of sensory overload.    Bright bright lights, and a noise to drive you slightly bonkers.

One final warning about pachinko is the pronunciation.    Don't make the mistake I did and seperate out the pa-chinko sounds, as "chinko" is a slang word for something else entirely.    You have been warned.

Pasta, and Italian food in general, is very popular in Japanese cities.    Usually it's very reasonably priced, and a decent selection of dishes is available.

Indeed, the number of Italian restaurants is constantly increasing, and Japan is Italy's fastest growing export market for food.

Place Names
Here are some common suffixes in place names, to help you decode where you are, or where you're going.
Plastic Food

Many restaurants in Japan display plastic mock-ups of their dishes in the window of the restaurant, or in a glass display cabinet.

The beauty of this for the Gaijin is that you don't have to read Kanji to understand what's on offer in the restaurant.    Even better, many low- to mid-range restaurants also have photos of their food on the actual menus.

Best of all, is that in a roundabout way, it's the Gaijin who are responsible for this plastic food display in the first place.    Historically, when Westren foods were first introduced to Japan, the locals were completely dumbfounded by the descriptions on the menu.    So, to smooth the introduction of new foods, and to drum up more interest and business, the restaurant owners displayed wax versions of their new Western dishes.    Eventually, this changed to plastic, and broadened to encompass the entire range of foods, not just the Western ones.

Plastic foods also make a unique souvenier from Japan - it's not exactly high-culture, I'll admit, but if you'd like to take home something a little quirky, then head out to Kappabashi the big kitchenware market area of Tokyo, where a typical "dish" can be had for about 500 yen.

Pocket sized monsters spawning a worldwide merchandising extravaganza.    Starting life as a computer game, giving birth to a cartoon, manga, a movie and countless toys.    Now the Pokemon are adored the world over by kids and by college students who are too stoned to go to university.

Remember if you want to help the merchandising - You gotta catch them all!

The Japanese love things that are cute and cuddly, and Print Club is what happens when the locals get their hands on the boring old "Passport Photo Machines" found in the West.

The result is Print Club - you step into the enlarged machine, select any number of wacky backgrounds, have your digital photo taken a few times, decorate it with hearts or stars or rainbows or whatever ultra-cute charactr takes your fancy, run around the machine a few times trying to figure out what to do next, and then, eventually, you get 16 photo stickers you can swap with your friends!