Language
There is no definitive theory concerning the origin of the Japanese Language.    What can be said is that it is definately unrelated to the Indo-European language family, thus making Japanee difficult to learn, from a Western point of view.

Japanese developed in a comparatively insular and stable community, in isolation, over a long period of time.    As such, since the people already understood each other without speaking, much of the Japanese language consists of omission rather than statement.    What is not said is as important as what is said.

Also, since your partner will already understand what you want, and since you wish to maintain a proper Public Stance, strong assertions are generally avoided, and indirectoin is favoured to avoid misunderstandings later.    Many Westerners believe that the Japanese never really say what they mean.

The Little Girl Wearing Red Shoes    Aka i Kutsu
One of the most famous songs in Japan, and one of the least well understood.

Oh! Little girl nice on you pretty "Red shoes"
She has gone far away with a foreigner (American)

From the port of Yokohama, over the waves
She has gone with him to his home

I wonder, if she is happy and have nice days
I wonder, if her eyes are blue like foreigner

The song tells the story of a little girl named Kimi, whose poor parents were forced to give her up to an American gaijin couple, before migrating to Hokkaido to eek out a living as pioneer farmers.    They were unsuccessful, suffering family deaths and farm fires, before finally moving to Sapporo, where Kimi's father found work with a newspaper.

Kimi's parents often wondered where their daughter was now.    She had gone back to the United States, were her eyes now blue, like a foreigner's?    Kimi's mother eventually died, still crying for her daughter.    Another worker in the newspaper office was moved by their plight and wrote the poem of the Little Girl Wearing Red Shoes, which eventually became a song.

Almost every Japanese person has heard or sung this song at one time or another.    Yet, few, if any, are aware of Kimi's true plight.    After a few years, the American couple who'd been looking after her were forced to return to the US, but Kimi had contracted TB, and could not be moved.    Contradicting the words of the song, she had never left Japan at all, and instead was languishing in an orphanage in Yokohama.    Mother and daughter could possibly have been reunited, but neither knew of the other's location, and they died apart and alone.

Eventually a statue of Kimi was erected in Tokyo.    On the day it was first unveiled someone left 40 yen at its feet.    A charity was born, and today millions of yen have been collected and donated to UNESCO and other childcare charities.

Locks
Door locks are nothing special in Japan, but since the first European visitors arrived, foreigners have found it curious that locks in Japan are opened by turning the key in the opposite direction!   Which is to say, Westerners would naturally try to unlock a door by turning the key to the right, but Japanese locks must be turned to the left to open them!

Useless information, I grant you, but everyone who comes here wonders about it! 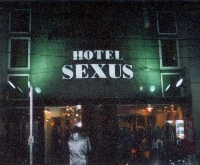 Not at all as seedy as it sounds.    In Japan, many people live with their parents until they get married, at whatever age.    Also, once you are married, you'll likely be living in a small apartment with thin walls, and once you have kids, you'll again have very little true privacy.    The solution for all of these people seeking a bit of privacy with their significant other, is to rent some time in a Love Hotel.

You can rent a room by the hour, or you can even stay the whole night - but just don't expect to be able to check in at noon.    These places make a profit on turnover afterall.

Also, if you're out with a group for the night, and stuck with no way to get home, it's worth considering that these places charge for the room, not for the number of people who go into it....

Lucky 5
Different things are considered lucky in the east and west, and some Japanese superstitions are based on similar-sounding words.

For example;    The 5 yen piece is of almost no monetary value here, but it is considered fortuitous simply because the Japanese for "5 yen" is "go en", which simply sounds like an expression for "good luck". So "I have 5 yen" may also mean, "Hey, I'm lucky."

Similarly, the word for "4" sounds a little like the chinese word for Death, so it's rare to have a 4th floor in a hospital etc!