Also known as Taijiquan Tai Chi is an ancient Chinese martial art, emphasising flexibility, strength, circulation, energy, balance, relaxation and meditation.    Although it's roots are in Martial Arts, for most people Tai Chi and the associated Qui Gong are better described as forms of meditation and relaxing exercise. 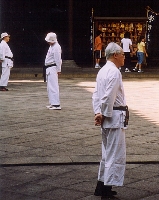 In Japan it's not uncommon to see people practising in public parks, or, many major companies have Tai Chi sessions for their employees in the mornings.    Walk into a department store just at opening time and you can sometimes see the employees finishing up their exercises.    We're happy in our work!

Interestingly enough, the Eastern concept of exercise differes greatly from the Western one.    The Way of Daoism explains that the slow overcomes the fast and the soft wears away the hard, and this is the philisophical basis of exercises like Tai Chi.    The Western concept of running around, sweating buckets and hurting yourself under the mantra of "no pain, no gain", was utterly bizzare to the Chinese and Japanese when the first Westerners arrived in the East.

Rice-straw matting.    The traditional covering for floors.    I always thought the idea of tatami matting was sorta romantic, quaint, a nice touch of old Japan.    And then when I was getting ready to come here I was warned that at times you get unexplained bites all over your body.    Yes, it is time to delouse your matting.    Yuck!

Tatami mats are also the traditional (and current) way to measure room size.    I have a 6 mat bedroom and 9 mat living room, for example.    Unfortunately just to complicate matters, different regions of Japan have traditionally produced different "standard" sizes. Each tatami mat ranges in size from 191cm x 95.5 cm, down to 176 x 88cm, seems to be the usual range.

Tatami mats are also said to have all sorts of health benefits - healing the body, soothing the mind, taking carbon dioxide out of the air, dehumidifying your apartment on a Summer's day.

Taxi
A theoretical mode of transport used by people for whom money is no object.

Some important differences between western Taxis and models in Japan:

The following is an excerpt from a Heian Era work entitled "The Lady Who Loved Insects", or Tsutsumi Chuunagon Monogatari, about a little girl who doesn't conform to societal norms -

Her other features were by no means bad.    But when she smiled, her white teeth gleemed and flashed in a manner that rather disgusted him, for there was something wild and barbaric about it.

These days, Japanese prefer white teeth, although some gaijin still consider the dental beauty of the Japanese to lag behind Western (and especially American) standards.

Finally, remember that in some nicer places, toilet slippers are provided, and you should change out of your room slippers as you step into the toilets.

Tokonoma
Alcove in a room where flowers or a scroll are displayed.

Although I have been in some places where a TV was "displayed". :-) 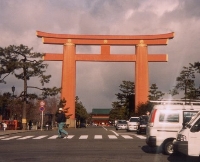 Gates to a Shinto shrine.

Usually coloured orange or vermillion red, and can be found in two varities:

Toothpaste
As in some other asian countries, they don't really have the same ideas of dental hygiene as in the West.    Apart from in the big cities, it's almost impossible to get toothpaste with flouride.    If you're coming to live in Japan, and especially if you're staying in a small city or rural area, my advice is to bring as much toothpaste as you can justify in your luggage.    Toothpaste that you can buy here is sorta strange.    There are even rumours (unconfirmed, expat~spread rumours) of the Japanese putting sugar in their toothpaste products to make it taste better.

It's not all doom and gloom though.    Bad as it might be, if you're on a budget, why not pop into an internet cafe, where there's sometimes a supply of toothpaste and toothbrushes for the customers who never leave!

Traffic Light Song
In certain areas of Japan, the traffic lights at pedestrian crossings play a tune as cross the road.    After living in Japan for a while, this song seems to be permanently embedded in your skull.    Ever wondered what the song is, what it's about, and why that particular song was chosen to be the pedestrian crossing music?

The song's title is 'TO RYAN SE' ( please let me pass)

There are also many legends associated with this song.    One of them goes a little something like this:


Long, long ago, almost all the people were poor and had lots of children.    They couldn't afford to raise all of their children, so sometimes, in desperation, they'd abandon a child at a shrine.     Children are believed to be 'God's children' until aged seven, so parents couldn't abandon them before then.    It was a serious crime to do that.    So, at the gate of the shrine the mother lied to the public officer, saying, 'Oh!  I want to have a celebration for my child' .    Then, she can pass along the path easily, but when she comes back home, along the same path, she doesn't take her child.   So, the officer can see that she's thrown away her child at the shrine.

And for Japanese people, the moral of the song and the story is roughly as follows:  We can go somewhere easily or safely, but maybe we can't come back safely.    So, we have to take care of ourselves until we arrive home safely.

The traffic light song is primarily for blind people of course, but it has the same meaning for everyone.   Although it does seem a little bit cruel for children to hear it every morning:    Be careful!    Your mother might abandon you at a shrine!    Then again, I suppose Western fairytales are nothing if not cruel!

The Tsubaki, or Camellia is considered a significant, and often unlucky flower.    Unlike most flowers, its blossom falls all at once, rather than petal by petal.    Seeing one fall is said to signify seeing a head roll - death for you or someone you love.
Tsuke
In Kabuki this refers to the process of beating two wooden blocks onto a board at the far right of the stage and done so to punctuate such movements as Mie poses, walking running and also tachimawari .