Reduplicatives
Reduplicateves, or linguistic doublings, (where a word is repeated, or just slightly altered), exist in many languages, but in Japanese they're really super-duper!

An extensive list of reduplicatives can be found in everyday Japanese, but for illustrative purposes, some examples might include -

And, in case you're wondering, from the examples quoted above, yes, the same concepts seem to show up as reduplicatives regardless of the language you're speaking!    These seem to generally relate to either terms of contempt, or concepts expressing disorganisation, although obvsiously, there are some super-duper exceptions!

It may be that these words appeal more to the feeling than to the intellect.   Both the Chinese and the Japanese languages abound with these reduplicatives - are they more downn-to-earth than English?

Japan consists of 47 islands, but only four of any great size.

The largest of these islands, Honshu, is further divided into a number of regions, which supposedly have their own distinctive properties, but I haven't been here long enough or moved around enough to make a proper assesment.

People here in the Kanto (ie Tokyo) region say that people in Kansai (i.e. Osaka and Kyoto etc) always think that they, the Kansai people, are the number one (ichi ban), but Tokyoites disagree, pointing out that lots of schoolkids from Kansai still come to Kanto to study in the best university, and to find the best jobs.

The people from the northern provinces on the other hand, have a reputation for being the most beautiful, because their skin is a little whiter, and the sun is not as harsh.

Rice is Japan's staple food, with a history of some 2,000 years of cultivation.    Parts of the plant were / are also used to make rice slippers, rice raincoats and race thatched roofs.    It is stil the major agricultural product today.    That's the problem.

Believe it or not, rice is actually more expensive in this rice-producing country than anywhere else in the world.    The problem is that in order to protect its expensive and ineffecient farmers, Japan does not allow any rice to be imported.    All farmers are forced to sell to the government, who then sell it on at a fixed (and hugely inflated ) price to manufacturers.

For a country that loves its rice, many of the people are totally ignorant of the fact that Japanese rice is not the only type, and that there are other types, lengths, thicknesses and colours of rice out there.

In some years this extremist control policy has actually led to rice shortages.    There was enough rice for cooking, but a shortage for producers of rice products like rice cakes, or Sake.

If there was a free-market in rice, then Chinese and Thai producers would flood the market in seconds, and the traditional Japanese farmers would be wiped out overnight.    So, Japan, like all rich countries, seeks to protect her farmers.    On the other hand, whilst the EU and the US erect import barriers and levy tariffs, Japan goes the whole hog and bans imports altogether.    It seems kind of fascist, but there you go.

Robopets
First came the "loveable egg", Tamagotchi, the "virtual pets" which you could feed and water, teach and play with.    Why settle for a virtual pet though?    The logical next step is the Robo-Pet - the intelligence of a virtual pet, in the body of a robot.    The lead contender so far is Sony's Aibo (pronounced I-BEAU).    Virtual dogs, then robot dogs... what's next?    Real dogs?
Romanji
Japan claims to have four writing systems:

"Romanji" however, is just the standard Latin / Roman / English alphabet.    Whilst it is true that it is sometimes in use here, on shop fronts and in advertising, it isn't really an alternative to the other more Japanese writing systems.    It's convenient for transliteration, and not much more.    Although I guess there's no point in converting "DVD" to Katakana since most people will at least recognise these Romanji letters.

Don't assume anything about the meaning of what you see though.    Japanese people tend to use our alphabet in much the same way as we'd sometimes have a chinese symbol on a t-shirt in the west.    One lower-level student wore a t-shirt the other day.    Using the Romanji alphabet, she proudly proclaimed;
I like big dicks!
The really funny thing is that she didn't know what it meant, and better again, her father had bought her that t-shirt, because he knew she was learning English.    How sweet.

Usually Samurai served a particular Daimyo, but if their lord died, or times were hard, many Samurai were forced to become Ronin, and ply their wares where ever they could find some work.

Sometimes a ronin could find employment with another lord, or in a free city like Osaka.    However, Samurai disdained trade and enterprise, and when the ronin found themselves unemployed many of them turned to banditry to supplement their incomes.    Their numbers tended to grow, and as a social grouping they were a thorn in the side of sucessive Shoguns.

As such, there are many tales of Ronin engaged in less than savoury activities.    Most famous of all is Chushingura , the tale of the 47 Masterless Samurai, which captures the essence of honour, revenge and loyalty.    This true tale of legendary proportions is celebrated in many a Bunraku and Kabuki drama.    Check out the This telling of the 47 ronin story for more detail.

Ropeway
What Westerners would call a "Cable Car" - i.e., a capsule which can contain several people, used to move up and down a rope suspended above the side of a mountain.

Rotemburo
Outdoor hot-spring pool, often in the grounds of a ryokan.

When Japanese people tell you that there's a rule, they're not joking.    Nor do they mean "guideline", "helpful hint" or "strong suggestion", no, a rule is a rule.    And it seems no matter how stupid it might be, they'd rather follow the rule than break it.

That being said, about half of the rules make complete sense, and the other half are probably just there to confuse the hell out of you. :-)    For example, it's wrong to drink coffee on the subway in the morning, but it's perfectly acceptable to drink beer on it in the evenings.    I won't even pretend to understand the reason why, all I can say is when in Rome...

Usually the best thing to do is to try to think of every rule in terms of its effect on The Group and Wa.

Flashdance is back in fashion, and it even helps to hids those fat ankles.

Japanese Middle School and High School students wear a pretty strict school uniform.    However, the girls at least are taking a few liberties.    There's the usual thing of having a skirt that looks like a belt, but there's the addition of extremely baggy stockings which look a lot like the leg-warmers of the 70s and 80s back home.

By the way, I would like to apologise for the graininess of this photograph, but I thought it was worth forsaking the use of flash, since a boy taking a flash-photo of schoolgirls' legs might not have gone down too well. 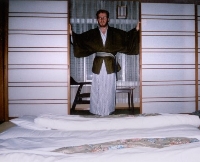 What you get depends on the nature of the place.    Some are little more than modern Western hotels, where you pay more for having no bed! :-)    Others are the real-deal:    A tatami room, a table and tea ready during the day, and a kimono-clad maid ready to pull out and make your Futon for you in the evening.    Meals and a communal bath are usually also provided, but optionally.

My stay in a Ryokan was probably the highlight of my first tourist trip to Japan, and I highly recommend them to everyone.

Of course, you should try a Capsule Hotel and a Love Hotel too, if you have the time and company, but before those, you have gotta try a Ryokan.    Just be careful, you may not want to leave.